The Official US Army A-2 Jacket is now available at US Wings.  For the first time since WWII, the A-2 jacket is returning to the US Army as an officially issued jacket.  US Wings is proud to be an official supplier of this jacket to both the US Army and the general public! Although the A-2 was primarily associated with the Army Air Force during WWII, it was also worn by non-aviation personnel.  This  includes officers serving in Airborne units & top brass like Gen. Douglas MacArthur. 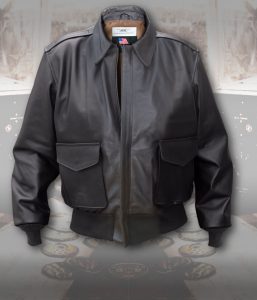 Despite the popularity of the A-2, production was canceled in 1943 in favor of cloth-shelled flight jackets. The USAF re-issued the A-2 to its pilots & aircrews back in the late 1980s.  Most noteworthy, this will be the first time in more than 70 years that the A-2 will be returning to the US Army. The jacket is based primarily on the current-issue USAF goatskin version, but made from the finest mil-spec cowhide.

The A-2 has been the most popular military leather jacket among civilians for decades.  Now you have the opportunity to own the exact same version of this venerable & iconic jacket that’ll be issued to US Army personnel! So don’t settle for a knock-off… order yours today and experience the “real deal” for yourself! Made in the USA.