Sgt. Hack and the Big Red One began their association March 1st 1968. Upon arriving in Vietnam Sgt. Hack was assigned as a Combat Career Counselor for the 1st Infantry Division. 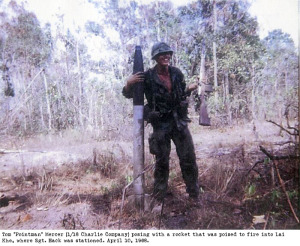 April 10th 1968
Sgt. Tom Mercer, the Pointman for Company C, 1st Battalion, 18th Infantry (“Swamp Rats”), came upon a group of Viet Cong that were about to fire six 122mm rockets at the Lai Khe Base Camp. Tom was able to stop 5 of the 6 rockets from launching and consequently was awarded the Silver Star. As a result he became known as the “Rocketman”. Unfortunately the 6th rocket hit the camp and as a result Sgt. Hack was wounded and received his first Purple Heart.

On May 1st, Sgt. Hack was selected to be the NCOIC of Protocol, or bodyguard, for Major General Keith Ware. This slot was created due to multiple attempts on General Ware’s life. General Ware was known as the Savior of Saigon and the Viet Cong had a bounty on his head. As recounted in the book, LIFE OF A WARRIOR, Friday the 13th 1968 was a horrible day. Hack was ordered by a 2nd Lieutenant not to board General Ware’s helicopter and find ground transportation to their rendezvous point. Upon take off, General Ware’s helicopter was hit by a RPG rocket and consequently all aboard were killed. Sgt. Hack’s convoy was ambushed and he was severely wounded. 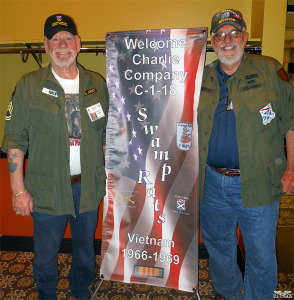 May 2013
Amazingly 44 years later, Tom Mercer and Sarge met by chance. Tom, upon reading the Vietnam section of th US Wings website, was startled to discover that Sgt. Hack was injured by the lone rocket that was fired on April 10th 1968. Realizing that was the mission in which he received the Silver Star he contacted Sgt. Hack to explain about the one that got away, In the photo above, Sgt. Hack and Tom Mercer meet for the first time at a Charlie Company reunion.

Sgt. Hack, Tom Mercer and other member of Company C were reunited at a reunion held in Nashville, TN for C Company’s 1st Battalion of the 18th Infantry, 45 years after the rocket attack on Lai Khe. Speaking to the group, Sgt. Hack reflected upon the importance of serving our country in Vietnam, the importance of recognizing the contribution these men have made to our society, and the importance of them being survivors. 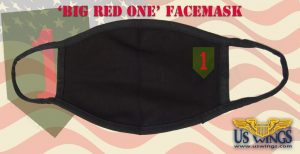 US Wings will donate 15% of the proceeds from the sale of this mask to the 1st Infantry Division Society. He is also proud to offer these USA-mad Face Masks to all US Military branches, and can print any Division , Battalion, Company or Platoon insignia, for any branch of the US Military on their choice of colored masks.

Available by calling 1-800-650-0659 or by going to www.uswings.com/product/us-made-custom-military-face-mask-big-red-one/

Sgt. Hack and the Big Red One, fifty two years later and above all, still going strong.