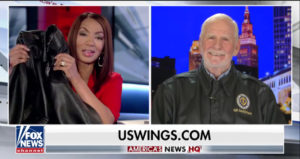 He was interviewed by Fox News Channel weekend anchor Arthel Neville and the interview was broadcast live at 5:50 PM ET. Sgt. Hack talked about how US Wings got its start and touched on various aspects of running the business. Check out the video here.