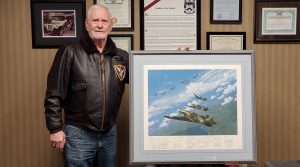 The story of the Flying Tigers and Sgt. Hack began In 1958.   Sgt. Hack was stationed at Wake Island, and was part of a 12 man elite crew of the US Coast Guard Loran station. The Flying Tiger Cargo Airline made several weekly stops for refueling and rest at Wake Island.  Part of Sgt. Hack’s responsibilities were to pick up the crew at the dock and transport them across the bridge to facilities on Peale Island for recreational activities.  Over the course of 16 months, he became lifelong friends with many of the crew members especially Dick Rossi, hence beginning the story of Flying Tigers and Sgt. Hack . 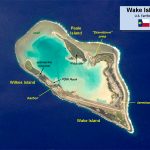 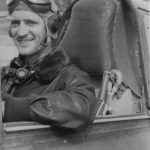 John Richard “Dick” Rossi was an original member of the famed American Volunteer Group (AVG), known as the Flying Tigers.  Originally a Naval aviator, Rossi resigned his commission in 1941 to join the AVG.  It was an all volunteer unit that helped defend China against Imperial Japan prior to America’s involvement in WWII. First of all He flew the now famous shark-nosed P-40 in combat with the First Pursuit Squadron (Adam & Eve).  Subsequently he flew with the Second and Third Squadrons, became an ace and was credited with 6.25 kills. Finally when the AVG was disbanded in 1942, Rossi joined the China National Aviation Corporation.  Flying supplies from India to China, He flew a record 735 trips across the Himalayas, known as the Hump.  Furthermore note that he is wearing a G-1 flight jacket in the P 40 Warhawk.

After the war, with his adventurous spirit Rossi founded the freight carrier company, the Flying Tiger Line.  He flew as a captain for 25 years, logging a lifetime of over 25,000 flight hours before retiring.  Can you imagine?  He was also the president of the Flying Tigers Association for sixty years until his passing in 2008.   Most noteworthy he was the recipient of many awards from the Chinese government, and furthermore numerous medals and citations from the US government, including two Distinguished Flying Crosses. The AVG was inducted into the Confederate Air Force Hall of Fame in 1998.

Sgt. Hack, founder and CEO of the US Wings company in 1986, manufactures military flight jackets. Eight years later in 1994, after being contacted by Dick Rossi, Sgt Hack created an exact replica of Rossi’s original G-1 jacket he wore during WW II.  This jacket features the  AVG, 1st Pursuit, CBI and Blood Chit patches, hand painted by artist Jim Harley, thus continuing  the relationship between the Flying Tigers and Sgt. Hack 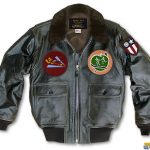 In November of 2003 Dick Rossi and other members of the AVG Flying Tigers, were invited to attend the Zhijiang Peace and Culture Festival held in Zhijiang township in Hunan Province, China.  At the newly opened Flying Tigers Museum in Zhijiang, Dick Rossi was asked to donate his G-1 jacket, a reproduction of the jacket he wore as a member of the AVG. As a result this jacket, shown below, custom-made in 1994 for Mr. Rossi by Sgt. Hack is now on display in the Zhijiang museum. 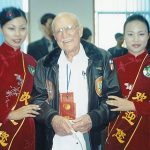 The Second Jacket – A request from Mrs. Lydia Rossi

Dick Rossi,  president of the Flying Tigers Association, was the proud wearer of your jacket that had been customized for him ten years ago. It had the AVG insignia, the First Pursuit Squadron, his name, a blood chit, etc.

Dick wore his jacket on this trip where it was quite a show stopper. It was photographed extensively and was quite admired even though we explained that it was a replica – not original.

When we were in the city of Zhijiang we were taken to a museum which once served as General Chennault’s headquarters. While there, Dick was approached by the director of the museum to donate his jacket to the museum. We were a little shocked at first, but then decided it would be for the best. They arranged a very nice ceremony, complete with lots of press, and Dick handed over the jacket to the Secretary General of the province. I have sent you three photos.

We would like to replace that jacket. Please tell us if you can remake this type and if you still have the information about it, and how much it would cost to have a new one.

Sgt Hack was honored to fulfill Mrs. Rossi’s request and therefore duplicated the original jacket he had created in 1994.

Thank you Letter from Dick Rossi 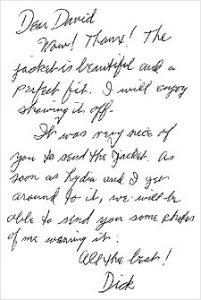 In appreciation for making this second jacket, Dick Rossi sent Sgt. Hack a print of the Flying Tigers with actual signatures of 55 Flying Tiger pilots by Stan Stokes . 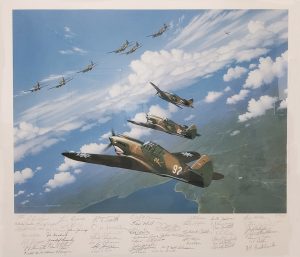 The Flying Tigers and Sgt. Hack, a relationship began in 1958 and continuing on for 62 years!   Above all this would make a great movie.